I woke up late the next day as I was undecided whether to stay back or head to Delhi. Jai's mom had prepared nice parathas for us and she was insisting that I should stay with them. If I stay back I would be having virtually one day to pack my bike and board the flight for Bangalore on 18th and this might not be sufficient as I wasn't sure how to send the bike whether on train or through some courier service. Also 18th would be Sunday and wasn't sure if the train parcel services are open on sundays or not.
I decided I would stay with them till lunch and then I will leave so that I have 17th which is a Saturday and will be able to parcel the bike either way.
Finishing breakfast I asked Jai if I can get my bike washed before starting. He took me to a near by service station where I got the bike washed. Bike's chain was REALLY lose by now and the service guy said the links have to be removed since he can't tighten it anymore and he didn't have the tools for it. I thought let me get to Delhi and then I can take care of it in Bangalore itself.


Came back, took bath and told Jai that I'll be leaving after lunch telling him the constraints I have for the bike. We all had lunch and shared my photos with Jai and Nirrman.


I said thanks and goodbye to Jai's family. Jai came with me on his bike to guide me till the route to Delhi. I filled petrol from the city, said goodbye to Jai too, it had been a pleasure being with those guys for the last two three days. It is true that hardships bring people together no matter from what origin they are. I met these guys two days back when we all were stuck due to the landslide and here I am leaving Chandigarh having two friends and sweet memories.


Feeling satisfied with the events, good or bad, happened on the trip I was thanking God I am able to complete my trip successfully. These last 250kms odd kms will take me closer to home and it will all be good. However that feeling was short-lived. As I was passing the Chandigarh-Ambala section there was too much of traffic at one point and I slowed down and was at the right side of a passing truck. With giving any signal the truck started coming towards the right and I had no where to go as I was right next to the divider, I braked hard and I was very sure that I would get out of the truck's way before it closes right in. But I don't know what happened I didn't get out of the way, the truck's right sharp edge hit bike's handle bar and threw me off-balance. Got hit from the left and went banged the right foot peg on the median in the right. Miraculously I didn't fall of the bike, my feet were off the foot pegs and the bike was careening violently first left to right and then right to left after hitting the median.
I somehow held on the bike, I didn't want to fall down right in the middle of the road with the heavy traffic coming from behind. It was really fortunate for me to somehow be on the bike and get to the side of the road away from the traffic.
I stopped and for a minute couldn't believe what just happened and a sigh of relief that I escaped from what could have been a near fatal accident. That highway probably kills more people than probably the Himalayan terrain...


I had pain in my right ankle and in my left hand, The pain was bearable I knew there is nothing major in either of the places. I checked my hand and I saw a little chunk of the flesh was chipped off from it, it was just a superficial injury. I wasn't wearing the riding gloves since it was very hot, goes to show how important the riding is. The main source of pain was my ankle which had caught in between when bike hit the divider. Good that I had worn the hard army shoes which saved my leg quite a bit except for the twist in the ankle. .


I checked the bike, left side the mirror had dislocated along with the lever and on the right side the rear brake lever had come off from the frame that holds the master cylinder and the brake switch. This meant the rear brake wouldn't work at all for now.

I tried recollecting of what just happened, whether it was my mistake or something else. One thing was it was my fault that I ended up on the right side of the traffic along with the heavier vehicles but the other part I couldn't understand how the truck hit the bike when I was safely decelerating to get out of truck's range. I vaguely remember there were couple of cars behind me and there's a bleak possibility that the car behind hit me from behind which is why I couldn't get off the truck's range. I don't know what happened and will never know...
I was shaken a bit and was in double minds whether I should parcel the bike from Ambala only or continue ahead to Delhi with no rear brakes. In my last trip to Leh we had actually shipped the bikes to Bangalore from Ambala only through Gati services. But there were quite serious damages to the bike while transporting so I decided against it.

I stopped at a tea shop, gathered myself up checked myself and the bike and I continued ahead to Delhi slowly. I was thinking this just happened probably me being relaxed too much after the trip where I was cautious all the way and said to myself not to take any thing casually. As they say in Hindi "सावधानी हटी तो दुर्घटना घटी" (The moment you are not cautious accident will happen)
By 7:30pm I reached Delhi and I called up my friend Nitin to see if I can stay with him at his house for next two days or not. His house was going through some renovation and hence there was no possibility that I could stay there and so was I searching for a neat hotel where I can park my bike safely and spend the next two days. Nitin told me to look for it in Karol Bagh area. I was searching and the bike started giving troubles and now it showing sign of tiredness after the hardships that it has gone through. I finally found a hotel, parked the bike, checked in, and crashed for the day as it was already late. The hotel room charges were 1000/- per day with AC. It was very humid in Delhi or at least I was feeling it that way :D
17th July 2010
Day 14 Delhi - parceling the bike 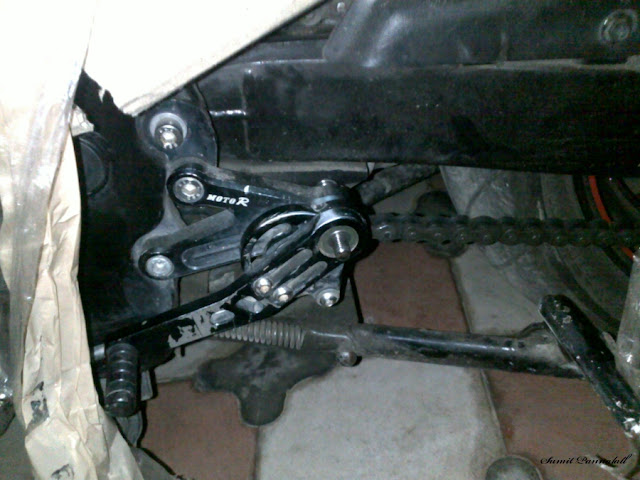 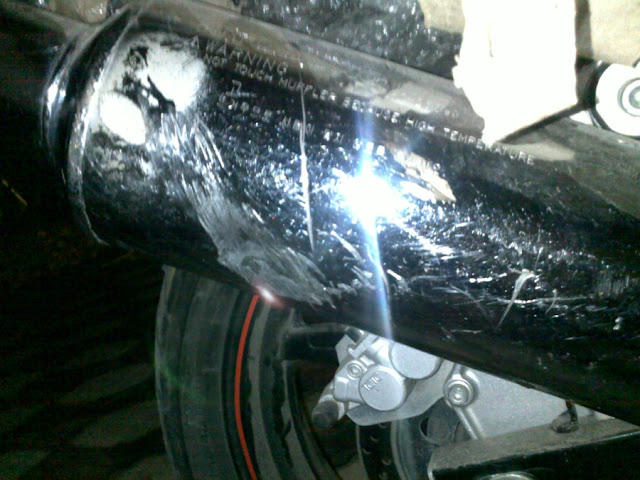 I somehow got my footpeg fixed but the dent in the exhaust is still there and might not be able to fix it.
Anyways can't help all these things and this will not sadden me much and take the joy away I had in the trip.
So this is how my fabulous and one of the most memorable trips of my life ended with lots of incidents some bad but most of them were happy moments that I experienced in the trip.
I hope I was able to narrate my story clearly and was enjoyable to the readers.
Wouldn't suggest anybody to go alone in the trip. I was very lucky to be not stuck anywhere nor did I have any unfortunate incidents with me.
Next time it won't be a solo trip as next time I will be with my brother who is very interested in making his debut ride in the Himalayas and probably I'll accompanied with my pillion, my beloved wife.
Till the next time Ciao :)
Hope you enjoyed this whole trip log. Thanks :)