By sumit October 15, 2008
So again back to the road. Today we had planned for reaching Pangong Tso which was around 102Kms from Leh. The biggest hurdle for reaching there was the dreaded stream called "Pagal Naala". this stream, in fact all the streams in Himalayas, would be going through the rideable roads and its characteristics will be, you can cross the stream with ease in the mornings till noon around 2 o clock after which the it would be impossible to cross it. The reason being the snow in the mountain peaks would have melted by noon which will inundate even a small stream. Hence we had to cross the Pagal Nala before 12 o clock.
Keeping this in mind we wanted to start early. Even if the 100kms sounds very easy to do but it is not easy in the mountains to cover even this small distance. The bikes won't go fast, the rider also is not at ease if he isn't acclimatized well with the high altitude and to add to that pathetic roads and sometimes no roads itself.
We asked our scorpio driver to come early next morning. Morning we were ready and the driver came at around 8 o clock. The driver asked us to move ahead and reach Karu from where the diversion goes to Pangong tso lake. The driver was supposed fill up the cans and join us in Karu where we had breakfast. But he delayed in joining us as he said he had to get all the bills from the taxi stand before starting and hence he joined us pretty late. by this time it was 10 AM and our stipulated time to cross the Pagal Naala was seeming very difficult to meet.
Anyways couldn't help it. As soon as he joined us we start towards Pangong.
On the way we had to cross the mighty Changla (Alt: 17360Ft), the third world's highest motor-able pass.
At the Changla top one gets free hot water and tea till 6 PM in the evening. We had tea there and started descending towards Tangtse, a village 72 Kms from Leh.

Photographer: Prabhu
There were some stunning views on the way but we couldn't spend much time capturing them in our camera as we had planned to cross Pagal Naala. Otherwise one more day would have been wasted in waiting for the next day to cross it. Prabhu was berserk in riding and he wanted to cross Paagal Naala anyhow before 2 o clock and he wasn't stopping anywhere en-route. We did manage to stop at some places and took some snaps and Prabhu was a bit angry about that. Anyways everyone's priorities were different at that point of time. We wanted to savor the moment and the view en-route and he wanted to cross Paagal Naala.
Some of the pics en-route: 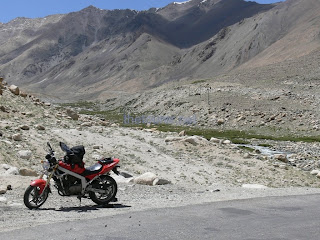 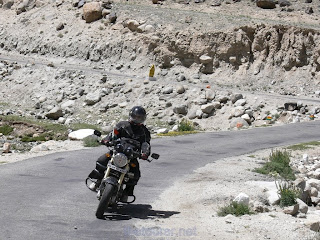 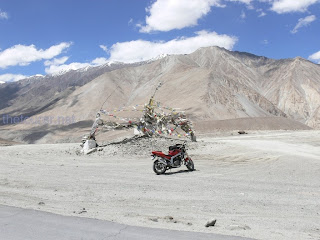 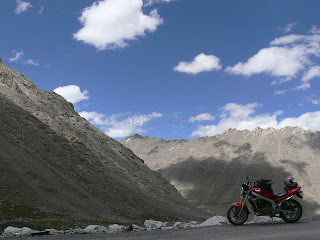 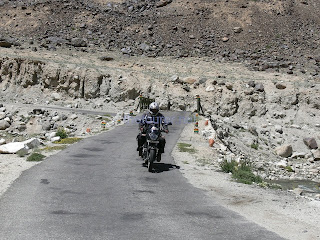 We were running out of time for crossing the Paagal Naala. But still we tried our level best to reach there. When were around 16kms from Paagal Naala and the time was 1 o clock something, we saw army trucks coming back from the other side. They informed us that Paagal Naala is over flowing and it is impossible to cross it at this time. Then I decided not go for kill and stretch myself or the bike for crossing the naala. But Prabhu was persistent and we decided to to go ahead 16kms and check out if we could cross it. We were low on petrol also and I was concerned about round trip 32kms just to see the naala and coming back. But still everybody decided to take a look. We reached the naala and saw a lot of vehicles parked there waiting. And really the Naala was overflowing like anything. It was no more a small stream, it was like a full blown river now which was impossible to cross. In a matter of minutes of standing there we saw it getting widened by at least a feet. We spent sometime there and decided to head back to the place where there were some camps.
Some pics of the Naala: 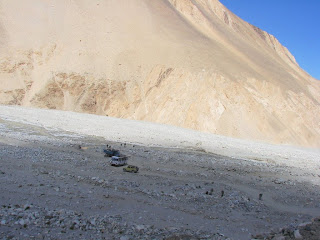 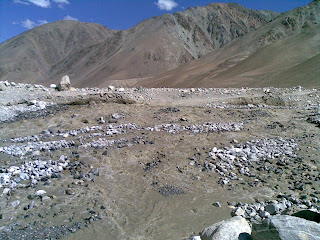 Photographer: Prabhu
While coming back I was the front rider and I noticed by this time even the smallest of water streams which were not even noticeable while going forward, now they too had inundated the roads. I crossed one such stream and this idea of capturing motion pictures of our riders crossing the stream came into my mind. And I stopped the bike and started capturing the photos of the riders in action. Sunil Sir and prabhu also captured some photographs and they suggested me to go once again so that they can capture me in action (I was the first one to cross hence nobody captured my pic in action). Then I went back took a good momentum and crossed the stream at a considerable speed. The pics came out really nice . Have a look. 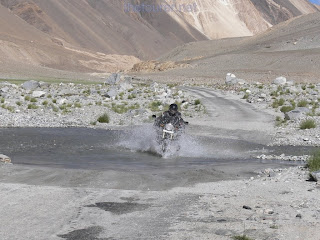 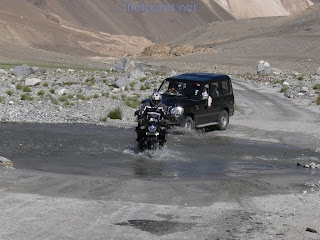 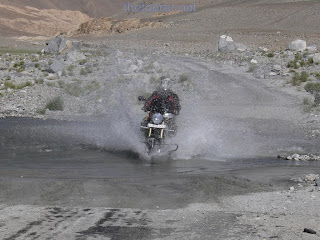 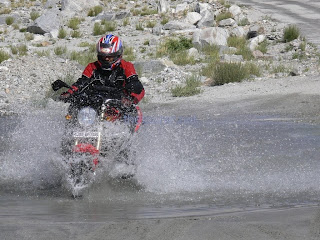 Yours Truly
We reached back to the camps and asked for two tents, one for three and other for two beds. We had ample time to relax, sleep, etc as it was only 4 0 clock by then and we had to wait till morning before we can try crossing the Paagal Naala. The guy who owned those camps was very nice, he showed us his Ancestor's things which he kept in a bunker sort of thing. It was actually full blown house which his ancestors used. He showed us a lot of things including gold and silver utensils, very old costumes worn by his ancestors etc. He told us there were a lot of people interested in buying the things from him paying very high prices but he didn't sell it. He said these things are his own and he wouldn't sell it ever. And we agreed with him.
He also showed us his kitchen garden where he grows vegetables, etc for his family and the guests in the tents.
Then I, Sunil and Chetan headed towards the fields and did a photoshoot around. I found a 5 rupee coin burried in the soil in the fields which I gave to the lady working there afterall it is theres only.
I thought of taking a walk around the place and thought of trying to learn more of photography. I heard some very sweet sounding chirping of birds and started following it. I saw some very cute birds playing in the water canal. I tried taking the snap but the bird was very smart and used to fly away to a distance the moment it saw me clicking the camera. May be it thought that it is a gun am trying to shoot it :)
Soon Prabhu joined me and he also clicked some photos and he also caught me in an awkward position taking the snap of that bird.
Here is the pic. 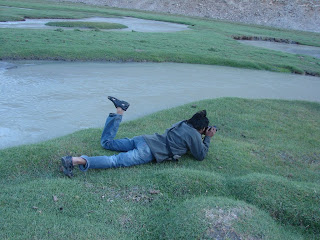 Photographer: Prabhu
We came back to the camps and spent some time together, had dinner and slept deciding that we had to get up early and start by 6 o clock so that we can cross Paagal Naala with not much problems.
So this is how we ended our Day 7. Some Random Pics: 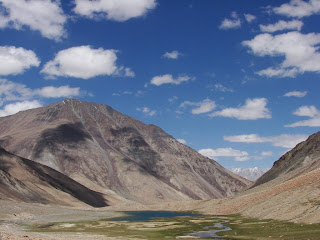 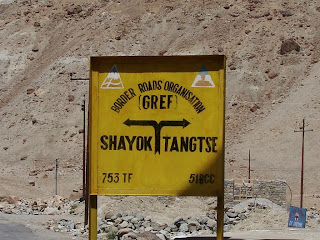 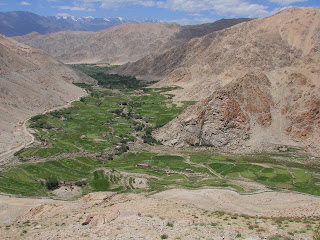 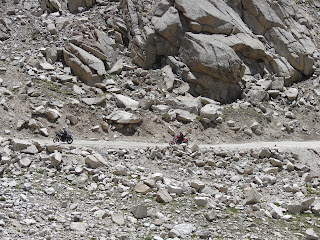 Chetan and yours truly en-route to ChangLa
Photographer: Prabhu 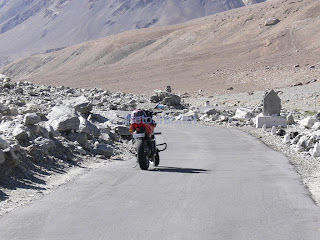 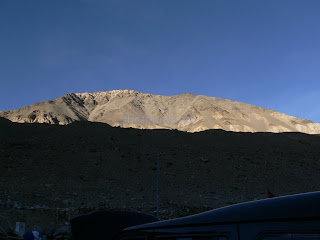 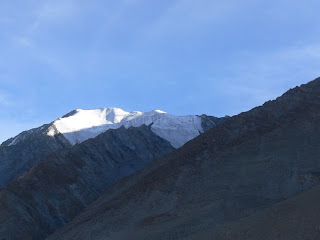 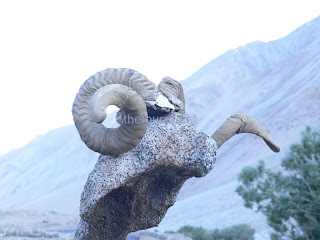 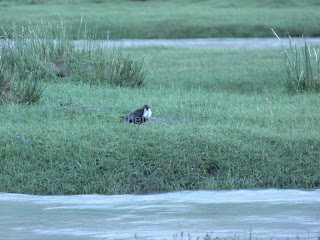 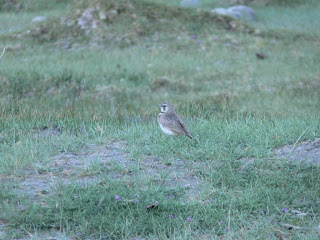