Next morning we woke up, packed up our things and were ready to start our way back.
But before we started took some pictures of the bike all covered from yesterday's mud adventure :D 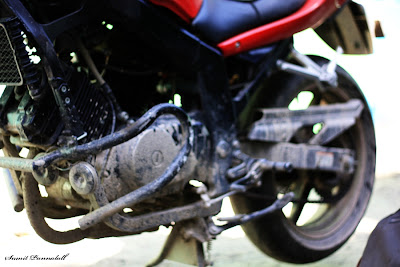 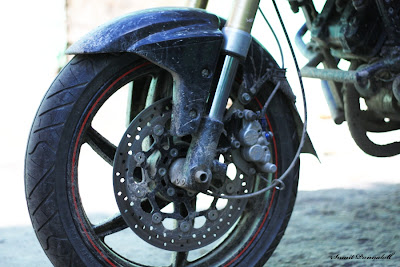 Jai and Nirman's bike's welding had broken and they wanted to get it fixed. I started before them and they would catch up with me after fixing it. After some confusion and miscommunication between us we got late and it was afternoon and we hadn't left Manali.


We were just riding by the river (don't know the name) and we saw a lot of camps for river rafting. Once we thought of going for it but it would need 8 people and also we couldn't have left our bikes and luggage with the camp guys and go for rafting. So we decided to continue further...
We saw river bank which was shallow and one could go into the water and may be have a bath :)
Both Jai and Nirman wanted to take a dip and so we parked our bikes in shade and went in. Well not me only those guys :) I was more happy being beside the river and enjoying the view and taking pictures. 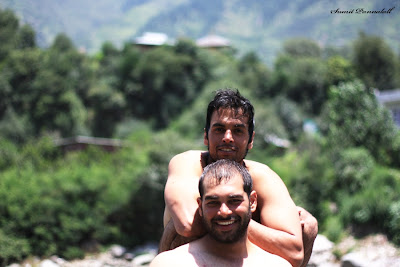 Nirman and Jai
After having a nice time spending time beside the river we packed up things and continued ahead onloy after a photo of Jai on my bike which he so direly wanted :D 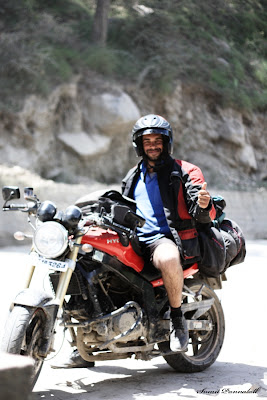 We crossed the big tunnel that comes on the way (I am again not able to recollect the name), again took pictures and continued ahead. 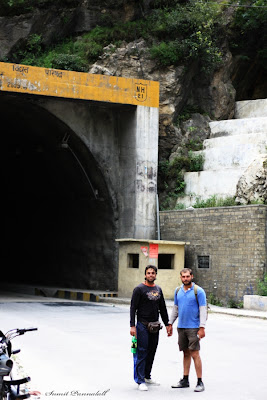 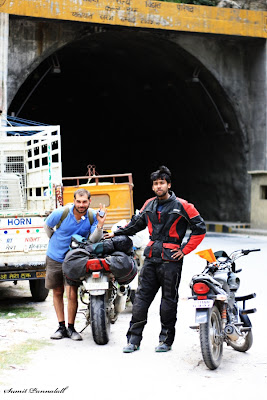 As we were coming to the planes it was getting hotter and hotter by every kilometer
We stopped on the way to have icecreams and as usual pic time :) 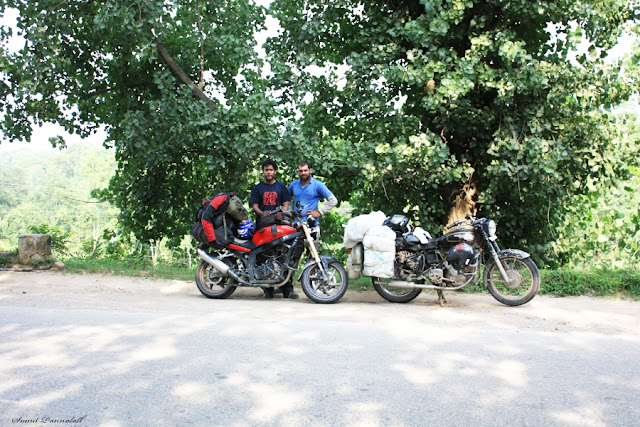 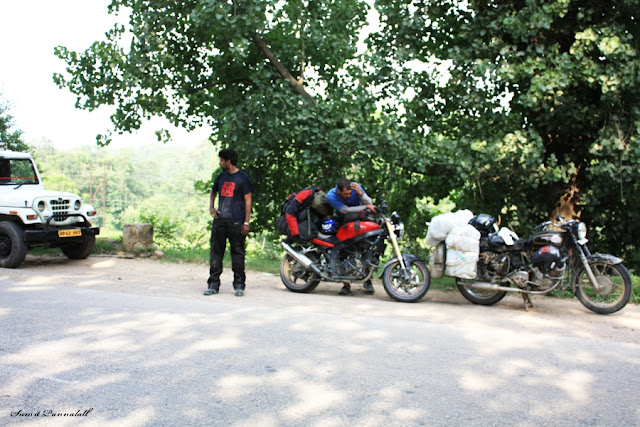 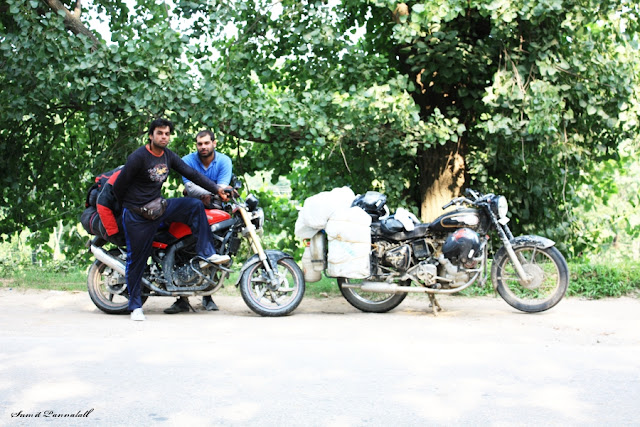 It was almost evening and we were still 100kms odd away from Chandigarh. Suddenly we discovered a puncture on Nirman's bike's rear tyre. They had a spare tyre tube however it was losing air slowly and we didn't want to change the tube and waste time. We just filled in air in the tyre and continued ahead. Every 10 kms the tyre would lose air and we had to fill in again. Like this we continued for some more time till we reached a junction where Nirman suggested a shortcut to reach their house. It was getting late (8 pm) so we took that route. By now the tyre wasn't holding air for even a minute and only option was to replace the tube which would mean taking out the rear tyre, replacing the tube and putting back the tyre which obviously meant  long time before we get going again.
It was very dark but good thing was I had the emergency LED light with him which one could have hooked on his head while working. All thanks to Sunil sir who gave me those.
As Nirman and Jai took out the old tube from the bike it was perforated and had to be changed. The inner lining of the wheel was poking the tube and apparently even if we put a new fresh tube inside it would also get punctured. But we expected it to hold up till we reach Chandigarh. I was thinking about the disadvantages of not having a tubeless tyre...
There is this one more problem my bike was also not holding much air and I needed to check air in my bike too frequently. We put back the tyre and fitted it to the bike. It was 11 o clock by now.
We started again but as expected the tube gave away again, we filled it again and continued.
Soon the tube was again to not holding up air and we had to stop. We were around 20 kms away from Jai's house. The only options was to leave the bike there only and take a cab or call a friend of Jai and pick us up. Since my bike was also losing air and the luggage was too much to carry three of us along with the luggage was not possible. We left the bike in a near by house.
There was some dispute between Jai and Nirman and we decided against taking the cab and they called their friend to pick us up.
After about an hour Rajeev, the friend, came and we slowly we reached Jai's house. I met Jai's mom, sister; they greeted me into their house. Jai's mom prepared nice parathas for us to have. It was already 2 o clock and we were so tired after the sort of adventure we had with the punctured bike :)
We slept after late dinner. Next day I wasn't sure if I want to head back to Delhi or stay back, as suggested by Jai to stay with his family next day. My flight for Bangalore was on 18th and I had three days with me and 250 kms more to cover. Also I needed one day to decide for the packaging for my bike.
I thought I would decide whether to stay or go the next day only. So this day also didn't go as expected but yeah enjoyed every bit of it....
Since my journey is coming to an end and not much to write as it was usual home coming, hence I'll be clubbing the rest days events in one log.
Day 11 Rohtang Pass - Manali | Day 13 Chandigarh to Delhi and homecoming...