Bangalore to Delhi on train with the bike


Important Notice: While on the trip out of goodwill I had shared my pics with some of fellow travelers. It might well be possible that you might see my pictures that are shown here, posted somewhere else on the web too. It was not very wise of me to share my pics without proper attribution (watermarks) done, but if you do see such pictures please report it to me.
2nd - 4th July:


So the D-day had come, July 2 Friday, I had decided to finish my work in office leave early say by 3 o clock so that I get the bike packed and book it on the train I was about to travel, Yeshwantpur to Nizammudin Sampark Kranti express. The train choice was obvious because I wanted to book the bike in a train which starts from Bangalore and ends in Delhi or Nizammudin. I came to office early and finish up as much work as possible. I got a call from Santosh who was also about start his trip one day earlier than I was supposed to. He had already booked and shipped his bike to Delhi and he gave me details of the booking procedure and that's when I realized that I had left my bike's registration book at home only which meant I'll have to go back to my house, go to the station, book the bike, come back, take the luggage and again go to the station and start my travel. Obviously I didn't have that much of time. Hence I decide to go home take luggage, put it on my bike just as I would do on the trip and go to the station.
I reached home and this is how my bike looked: 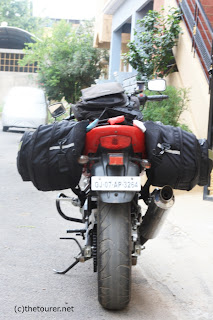 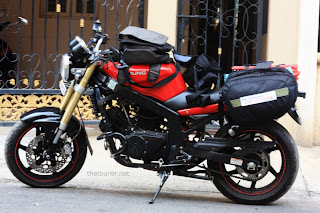 Although the setting wasn't perfect and the width of the bags were way out of the scope of bike's width. But I managed to reach the station without hitting any other vehicle :D
Straight away I went to the packing guy in front of the station and asked him to pack the bike in a proper way. He normally charges 300/- but seeing my bike he asked me 350/-. I said to him if he'll pack my bike in the best possible way so that it doesn't get damaged. He agreed to put more of packing material to ensure the same. 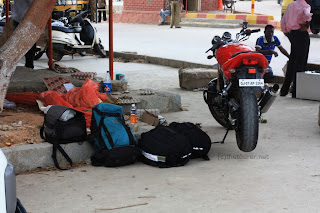 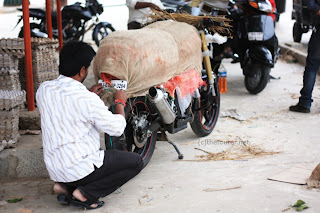 My bike getting packed in usual way the train luggage is packed but with extra bubble wrap and cardboard paper. After the packing was done I put my luggage in the cloak room so that I can take the bike in the booking counter.
I took the bike to the counter gave the required documents (copy of bike's registration book, id proof) and the officer made a bill of 1670/- for the bike and I gave 1700/- to the guy and he never returned the change. This is the time from then on money talks to get your work done. Govt offices just work like that. After getting the paper work done they asked me to move the bike to the storage area from where the luggage is supposed to be transferred to respective platforms. Two guys came and started asking question about which train the bike should go in and then they started their usual drama that there are a lot of bikes already to loaded and my bike would go only in the next day's train. I knew all they wanted is money in levy of taking the bike to the right place. They asked for a 1000 bucks but I said it is just one bike and it is urgent. If they aren't taking it I'll take it myself. Then they agreed for 500 and no less. I gave them the money and the guy took the bike to the platform in front of the luggage compartment and said that he'll come to load the bike in the train. It was 8 o clock by that time and I just had to wait for the train to be opened and bike to go in.
At around 9.30- 10 o clock the train was opened and guys came to load the luggage but I didn't see the other guy whom I paid the money for loading the bike properly in. The other guys started loading the stuff into the train except the bike. Worried I was and I just asked one of the guys. He was drunk to an extreme level that he could barely speak to me. Somehow he talked and asked 300/- to load the bike into the train. The time was running out and I didn't have time to search for the other guy I paid and ask him. I agreed and paid him the money. They loaded the bike on train not in a great way. They put 2 other bikes on the compartment, both leaning on my bike and their handles resting on my bike's tank. I was so worried I asked the guys so many times to keep the bikes separately but all in vain. All the other luggage things were thrown in and the luggage room was sealed. I couldn't do much now hence I got my luggage from the cloak room and headed towards my seat praying to God that nothing happens to the bike....


At 10:20PM the train started and so did my journey.
I was supposed to reach Delhi on 4th July morning. Two days train travel and I was joined by a Punjabi family with lots of kids. I had a good time with them playing movie names, country names, etc. I shared my pencil sketches I kept in my Ipod with them and they liked it a lot.


The time past and 4th July I reached Delhi and all the time I was worried about my bike. Straight away I went to the luggage room to check my bike and it looked fine from the outside.
It was 10:00am I once again put my luggage in cloak room so that I can get my bike released from the station.


Trip Preparations | Day 1 Around Delhi and To Chandigarh

Important Notice: While on the trip out of goodwill I had shared my pics with some of fellow travelers. It might well be possible that you might see my pictures that are shown here, posted somewhere else on the web too. It was not very wise of me to share my pics without proper attribution (watermarks) done, but i f you do see such pictures please report it to me. July 6th: Day 3 Amritsar to Udhampur The next morning I had decided that I would get my bike washed, get the bike's chain tightened, etc as I didn't know if something was available in Patnitop or further. I asked the hotel guy the time when the shops open up so that I can go and get the things done. He said it won't be before 10 o clock. For that day I was supposed to cover approximately 280kms and it was doable even if I start a little late. Hence 10 o clock went out, after some roaming around found a mechanic's workshop and asked him to wash the bike and do other stuff. Took one picture through my mobi
Read more