Around Delhi and To Chandigarh

Important Notice: While on the trip out of goodwill I had shared my pics with some of fellow travelers. It might well be possible that you might see my pictures that are shown here, posted somewhere else on the web too. It was not very wise of me to share my pics without proper attribution (watermarks) done, but if you do see such pictures please report it to me.
Day 1 - 4th July, Delhi:


I went to the parcel office  and as usual I had to wait so much to get it released. Eventually I got it released and while taking the bike out I saw another inspecting the bike and he found that his bike's battery is missing along with other stuff. It seems things had been taken out while it was parked in the store room.
Also one thing to note is that when the luggage reaches the destination, the owner has to get it released within the first 6 hours otherwise there is a charge of 10/- per hour from then on. The guy had come to take his bike after 6 days and he had to pay 6*24*10 = 1440/- which is well more than the amount he must have
paid for the transport plus he lost bike's battery and other stuff. Seeing all this I was just praying that my bike is intact. I took it out of the station paying 50/- yet again to the police guys who faked that he is checking the paper work for the bike. I opened the wrapping of the bike and the bike didn't have any damage whatsoever and I was so happy to see that unlike the last time when we were horrified with the condition of our bikes.
So by now I had already spent approximately 2500/- (including the usual shipping charges) for the bike to be transported till Delhi thanks to open and empty pockets of railway officials at every step.


Now that I got my bike out I had to get my luggage and for that I need to park my bike in a proper so that I can go get my luggage from the cloak room. Traveling alone has its disadvantages. How I wanted someone that I can leave the bike with and get my luggage. Anyways I had to figure an effective way to deal with it and I parked my bike in the railways parking and got my bags. I noticed that since I had not kept the bags properly on the bike while getting to the railway station in Bangalore, they were torn from the sides and next thing I had to do was search a cobbler who can fix it. This is where disadvantage of over-packing showed. It was very humid and I had to carry 4 bags all by myself and roam around the crowded place like Nizammudin station. Luckily I found a cobbler nearby and gave the bags for fixing. By this time I had drank 3 or 4 glasses of lemon-aerated water that is sold by guys around delhi roads costing 5/- a glass. It was so refreshing that I can't explain how I felt. 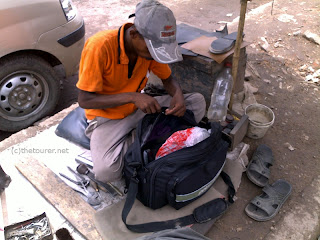 
Visit my flickr album for better quality pics (selected ones) : http://www.flickr.com/photos/sumitplall/
On the train to Delhi | Day 2 Chandigarh To Amritsar

Important Notice: While on the trip out of goodwill I had shared my pics with some of fellow travelers. It might well be possible that you might see my pictures that are shown here, posted somewhere else on the web too. It was not very wise of me to share my pics without proper attribution (watermarks) done, but i f you do see such pictures please report it to me. July 6th: Day 3 Amritsar to Udhampur The next morning I had decided that I would get my bike washed, get the bike's chain tightened, etc as I didn't know if something was available in Patnitop or further. I asked the hotel guy the time when the shops open up so that I can go and get the things done. He said it won't be before 10 o clock. For that day I was supposed to cover approximately 280kms and it was doable even if I start a little late. Hence 10 o clock went out, after some roaming around found a mechanic's workshop and asked him to wash the bike and do other stuff. Took one picture through my mobi
Read more