By sumit July 27, 2010
Important Notice: While on the trip out of goodwill I had shared my pics with some of fellow travelers. It might well be possible that you might see my pictures that are shown here, posted somewhere else on the web too. It was not very wise of me to share my pics without proper attribution (watermarks) done, but if you do see such pictures please report it to me.

By 4 o clock I reached Amritsar and started looking for a hotel. But it was all closed/half closed.
Roamed around for about half an hour and then decided to do what works best in India i.e. asking people around. They told the obvious solution to find a hotel which I also had thought earlier and that is to head towards the main bus stand of Amritsar and search. I did that and all the hotel in front of the bus stand were half closed and not sure if they were operational or not. I anyways to one of the hotels named "Hotel Shangrila". The guy said both AC/NonAC rooms are available and the price for AC room was 800/- with taxes extra. It getting really dry and hot and being from Bangalore, where the climate is so moderate, I was feeling the heat more and I thought of taking an AC room itself. He showed me the room and I liked it and checked it. I asked the guy about the bike being safe outside and he said daytime I can keep it outside, at night I can bring the inside the office and park there. I was satisfied with the stipulation because I anyways will be out for daytime visting Golden Temple and Wagah border.
Took much needed bath and came out for heading towards Wagah. But then the hotel guy suggested that I should also visit Jalianwala Bagh which is hardly a kilometer away from the place, then go to wagah and then I can visit Golden Temple which is open till midnight. I thought why not! I had only read about the tragedy that happened at Jalianwala Bagh in the time British Rule in India and I must pay visit at the historic place. I would not go into the details of what happened in Jalianwala Bagh. The links that I provided describe the tragic event.
Some pictures of the place. Reading/Seeing the things there made me very sad and angry too on the atrocities in those times by the guys on Indian people: 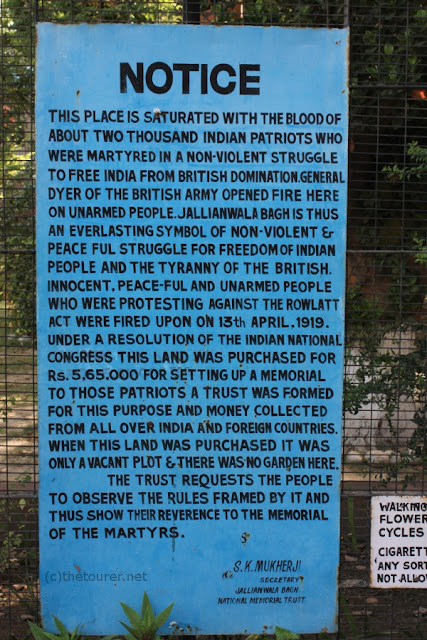 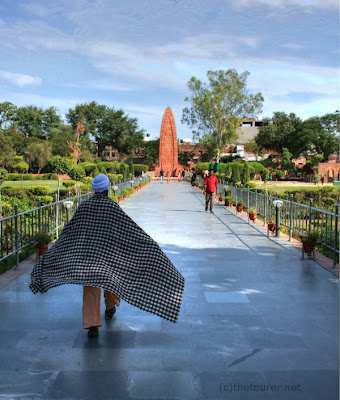 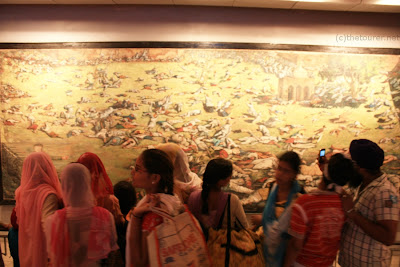 An Artist's depiction of the event. Wanted to take a full shot of the painting but couldn't because of the crowd 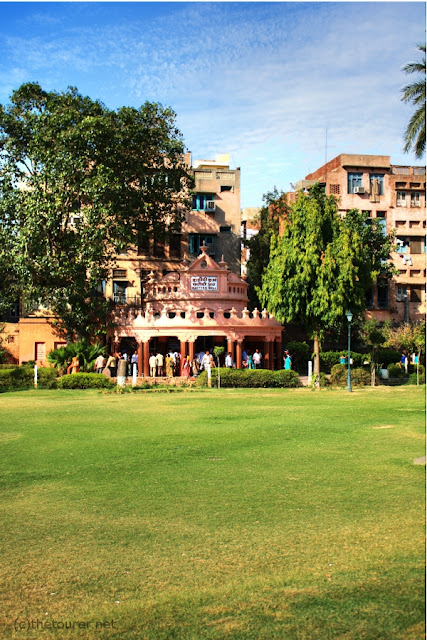 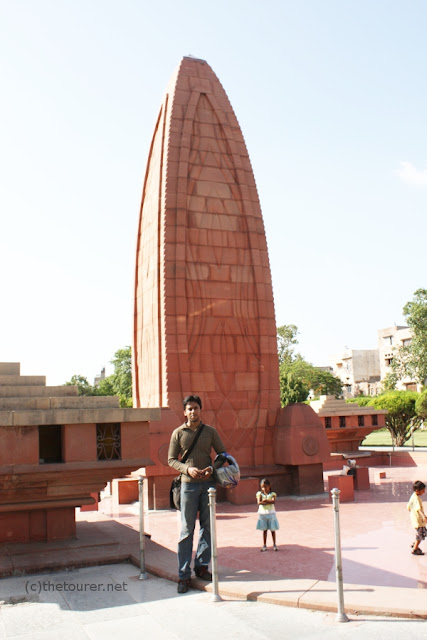 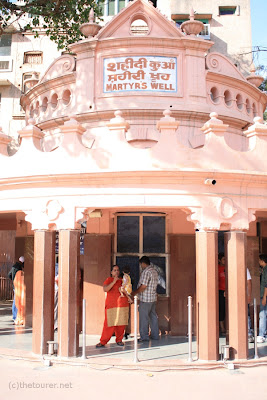 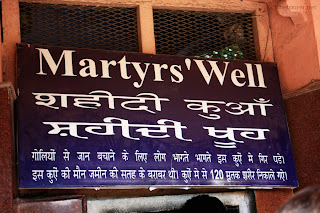 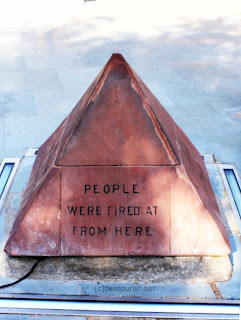 Walking down the narrow entrance to the memorial, knowing what happened there in the past, one can feel the chill. The experience was very overwhelming for me.
After spending some time there I moved towards the Wagah border to attend the daily ceremony that happens in the evening. It is 25kms from Amritsar and it's all the way a straight road which connects Pakistan and India and that is NH1. More can be read here
I reached the place in 20-30 minutes and I was asked to park my bike and from their one has to walk or there are richshaw walas who will charge 10/- per person and they'll drop you till the point where the Military security check happens and then you go ahead to the ceremony place just 50mts away from the border.
Before going to the security I deposited my camera bag, helmet to a local guy as one is not allowed to carry any luggage along
Note: One thing to note here is whenever someone is visiting Wagah ceremony do not carry many things (especially anything valuable) along as they will ask to deposit every thing except your camera, wallet, etc to local guys who charge 10/- per item. Now the things are safe but there is every possibility of things getting misplaced. 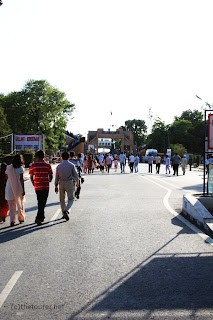 Walking towards the border 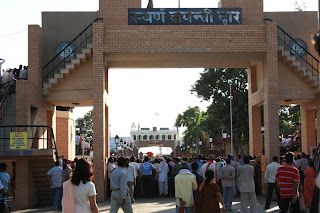 Flags withdrawn in the evening
The atmosphere was electric with the ceremony going on and people chanting "Vande Mataram", "Hindustan Zindabad" and at the same time the other side chanting their own slogans praising Pakistan. The ceremony is executed by the Military guys from both sides doing exactly the same steps. Every actions is performed with so much of power, enthusiasm and anger; you tend to get drawn into it and yet again the feeling is overwhelming. One has to be there to experience it, it cannot be explained in words. I took a lot of pictures of the ceremony but due to lack of a zoom lens the above ones are some of them that came out good.
After the ceremony was over I came back to Amritsar to visit the famous The Harmandir Sahib, The Golden Temple
Reached the gates of the temple and was searching for a parking place when I was directed by the police men to the free parking provided by the Temple authorities and I was told that it is the safest place to park my bike. I parked and then went inside. Removed my shoes, tied the customary band (I don't know what it is called) and entered the premises. The first sight itself leaves you spell bound. Riding all day and then standing in the sun for the ceremony at Wagah, my head had started aching but after spending some time, taking pictures of the place my pain automatically got better. Took pictures of the temple from different angles, called my friends and family telling them where am I and what all other places I visited that day. Spoke to dad and told him that next day I'll start traveling towards the Kashmir and following two days will be of little worry as the situation in Kashmir hadn't improved. Mum told me that it started raining very heavily after I left Chandigarh. I was lucky not to get caught and stuck in Chandigarh itself. I also spoke to my best friend Artee telling her about my journey so far and she was all jealous hearing my story :D She so wanted to join so me on this trip but somehow couldn't. She has promised me that next time she will definitely join. Lets hope so fingers crossed :D
Some pictures at the Golden Temple: 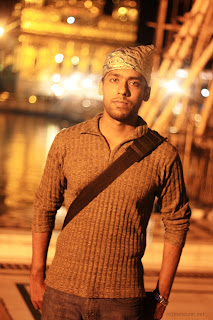 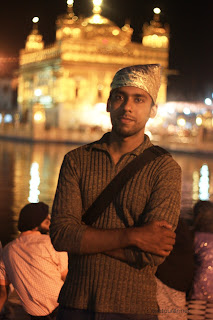 Asked one person to click my picture with the temple


I came back to my hotel room feeling very happy that I visited the places that I had planned for the day despite all the delay.
Next day was starting travel to the north and towards the mountains. All this while I riding in the plains. The biggest problem was the tense situation in Kashmir and the curfew imposed. But still reaching that place was one day apart. I planned to reach Patnitop hill station in Jammu the next day which was around 230kms from Amritsar.