By sumit July 29, 2010
Important Notice: While on the trip out of goodwill I had shared my pics with some of fellow travelers. It might well be possible that you might see my pictures that are shown here, posted somewhere else on the web too. It was not very wise of me to share my pics without proper attribution (watermarks) done, but if you do see such pictures please report it to me.

The next morning I had decided that I would get my bike washed, get the bike's chain tightened, etc as I didn't know if something was available in Patnitop or further. I asked the hotel guy the time when the shops open up so that I can go and get the things done. He said it won't be before 10 o clock. For that day I was supposed to cover approximately 280kms and it was doable even if I start a little late.
Hence 10 o clock went out, after some roaming around found a mechanic's workshop and asked him to wash the bike and do other stuff. Took one picture through my mobile.

As usual everyone around got curious seeing the bike and asked me a lot of questions about it. I got the things done and it was 11am. I came back to my hotel room, took bath got ready, dusted off my luggage, riding gear as it was all soiled because of rains and wet roads from the last day's riding.
By noon I thought of starting my journey. But since morning I was having slightly heavy head.
I having a heavy head generally means my dreaded headache problem has come back to haunt me. I have this chronic problem of headache which when comes to me means I should practically ground myself, do nothing and just sleep to make it go away otherwise it will worsen which I couldn't afford to do as that I have to cover the distance and didn't want to lose any days as I was still far away from the "troubled" area (srinagar) where I could potentially lose much more time due to tensions, curfew, etc.
I took the tablet and hoping for the heavy head to go away I started my journey towards Patnitop hill station in Jammu.
I was on the way but as expected my headache worsened and I had no option other than continuing my. This is the part of the trip I do not remember much of it. I was riding slow just some how trying to cover the distance for the day. I didn't even feel like taking pictures whenever I stopped for water or butt relaxation. Hence this day might have the fewest number pics I have taken. 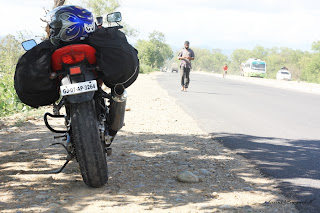 Had lunch en route, stopped for a  fuel refill at a petrol near Jammu state entrance. Asked a couple of truck drivers, who where coming from Srinagar direction, about the situation. They told me it was pretty tense and it is wiser to just pass through the area in the night only otherwise the miscreants will pelt stones on the travelers. But I thought that was a bit too much and the guys are just trying to exaggerate the things because as far as I had heard from the local people and read in the forums, there was no dangers to the travelers or the amarnath yatra passengers.
There was still a day left for me to reach Srinagar hence I hoped for the best and continued ahead. I was riding very slow and it was 5 o clock already when the milestone showed 110 or so kilometers for Patnitop still. I thought of taking an extended break at a dhaba and try to rest so that my headache lessens and I would be able to ride that too most probably in the night. 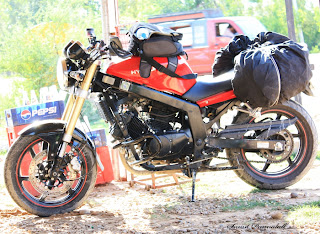 I ordered tea and just lied down on the beds that are usually laid down in the dhabas. Clicked the above picture there.
After resting for sometime I started feeling good and my headache had come down a little bit. I clicked some more pictures. The dhaba owner's kids had come to me and seeing curiously the pictures I was taking. I asked the dhaba owner if I could click a picture of his kids. He agreed and they posed for me :)
The asked if he can get a copy of the picture that I just took but since there was no computer/printer available around that place I couldn't get a print of the picture and give it to him. I asked the guy if he could give me his postal address so that I can post him the picture. He said he didn't have a concrete address to give. His name is Bitu Ram. And this is what he gave me his address for me post:
Bittu Ram
S/O Sri Munni Ram
Swankha Mod
Near Petrol Bunk
Jammu
He didn't know even the postal code of the area. I felt so bad for him. But I told him that I'll try to send him the picture somehow. He was happy to hear this. This was the picture I took:

One humble request here to anyone traveling to that part, Could you please take a print of this picture and if possible hand it over to the dhaba owner? His dhaba is after the petrol bunks where Jammu's state limits start, as the guy told the petrol bunk area is called "Swankha Mod" when one goes beyond the big board giving direction and distances for Srinagar, Patnitop, etc. The dhaba is on the left side of the road while going towards Srinagar. One cannot miss this dhaba as there is only one there and it is pretty big one.
I know it is a longshot and beyond practicality but I really wanted to give this pic to the guy.

One more HDR try
After talking to him for a while I continued my journey and hoping to reach Patnitop in good time.
It was getting dark fast and I was still pretty far away from that day's destination. By now I was in the mountains and it was all twisty roads all the way and obviously less distance covered. I was enjoying the roads and the cool temperature. Sun was setting beyond the mountains and couldn't afford to miss such fabulous scenes. Following are some clicks processed. Came out decent I believe :)
Also took my own picture keeping the camera on the rock and putting it in timer mode.

Soon it was dark and I was around 50 kms from Patnitop still, yes I was going very slow :( mainly due to headache. On top of that it started drizzling too. Next big stop was Udhampur and still I was bent to reach Patnitop so that the next day I would be reaching Srinagar in good time and if something goes wrong I would still have time to cross Srinagar and reach Sonmarg which is on the route to Leh from Srinagar and Sonmarg was supposed to be safer place.
Patnitop is 30kms from Udhampur. I reached Udhampur by 7:30pm and crossing it I saw a lot of hotel with nice parking places which was very enticing and my inner self was giving me ideas that I should stay in Udhampur itself and then cover rest 30kms next day when I leave for Srinagar.
But I ignored it and crossed Udhampur. Just after crossing Udhampur it again started raining a little heavily and this was the time I had made my mind to go back to Udhampur and stay there for the night. First of all it was all moutains roads plus it was raining quite considerably. Obviously not very recommended when you are having a severe headache and can't concentrate on the roads due to that.
Hence I went back and checked into a hotel name Skylark. Their charges were 800/- for Non AC rooms and 1200/- for AC rooms. It was quite cold already and I didn't feel the need of taking an AC room hence checked into a nonAC room. Ordered the dinner from the room itself because of my headache. Had dinner, took pills for the headache and slept. Next day I had to cover 30kms plus approximately 190kms for srinagar. And also if something goes wrong, travel another 40-50kms towards sonmarg. So again around 250kms of riding that too in hills. Not a great ask but still I wasn't knowing what was coming my way in Srinagar. Decided to start early so that I can reach the destination in good time.

Route on the map

Visit my flickr album for better quality pics (selected ones) : http://www.flickr.com/photos/sumitplall/
Day 2 : Around Amritsar | Day 4 Udhampur To Srinagar (and curfew in the city)