By sumit November 16, 2009
A short trip to Savandurga with my office folks. The initial plan was to go out for a day with the team and after some discussions we came up with Savandurga which wasn't very far away from Bangalore and we can come back by lunch time.
Savandurga is around 60Kms from Bangalore towards Magadi.
Some facts about Savandurga:
http://en.wikipedia.org/wiki/Savandurga
I opted to come on my bike as I have that motion sickness problem and can't sit in a bus/car for long duration.
We started from our office at around 5 o clock and took the magadi road. There are couple of other routes also to reach this place but we took this as the bus driver knew only this one.
Took a left after Magadi (not sure after how many kms), I wasn't sure of the route to reach there and was following the bus. I was able to see the monolith and thought of stopping and capturing a photo or two. After taking a couple of shots I continued and I missed a left turn which the bus had taken for reaching at the foot of the mountain. Thinking that the bus has continued on to the same road, I rode hard to catch up. I was going over kmph all the time so that I can catch up fast, even taking the corners in the same speed. It was good fun riding so hard after a long time not to mention a couple of harsh "tank-slappers" due to the bumpy road and more tyre pressure. Anyways all in all, a fun ride for 10 kms of bus chasing :D which wasn't going that way. After sometime I realized that the bus can't go this fast and I stopped and tried calling the guys on the bus and asking if they took any diversion and yes they did and they told that they've already reached there and starting the trek. I just asked a villagers about the place and started heading backwards looking for the right turn. 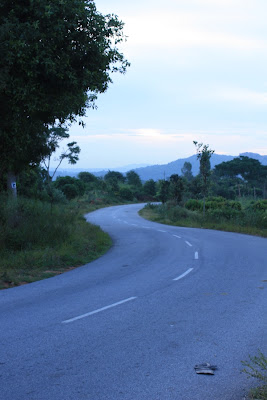 Eventually I took the turn and reached the place. The folks had already started the trek. I parked the bike and joined them. The initial trek felt a bit more tiring may be because it was morning time and our bodies weren't warmed up properly. 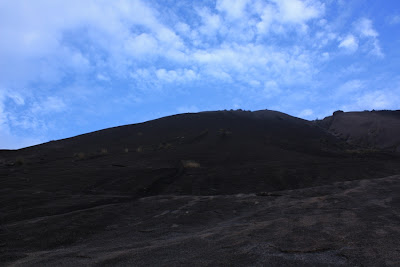 We took breaks in the middle taking photographs. We reached a particular point of the trek when we didn't have anywhere to go as the way up was a sheer incline with no place to hold on. 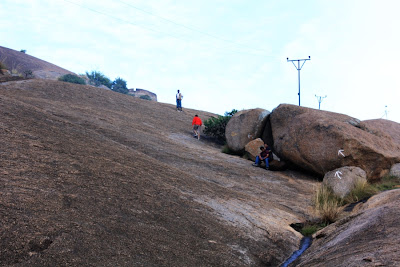 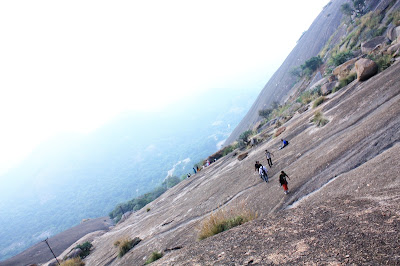 My team mates coming up 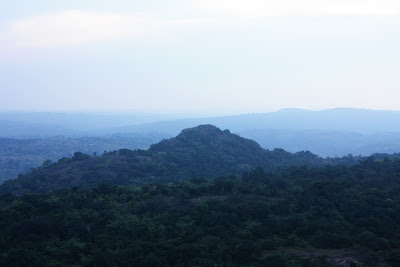 The only way was to head back little and take a detour, just then we spotted a ridge in the mountain which we could have taken to reach the other part of the mountain. Sethu (my office colleague) and I decided to take that route while others trekked back to take the other route. Climbing through ridge was the fun part and some parts we had to do the "Jackie Chan" thingy to cross the deep parts of the ridge. It was fun!! I captured Sethu at the right moment when he was crossing 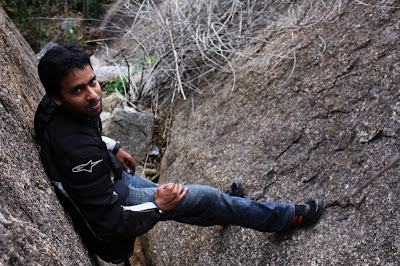 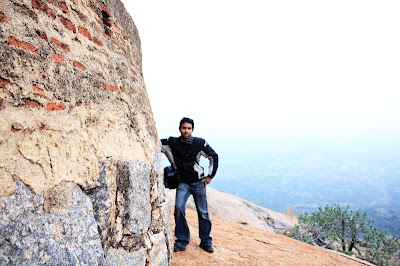 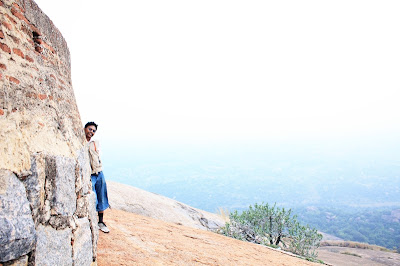 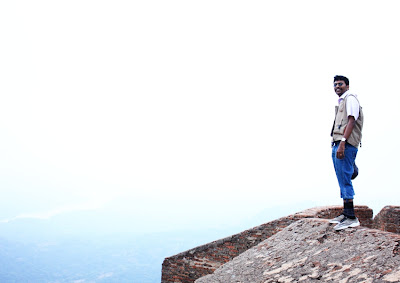 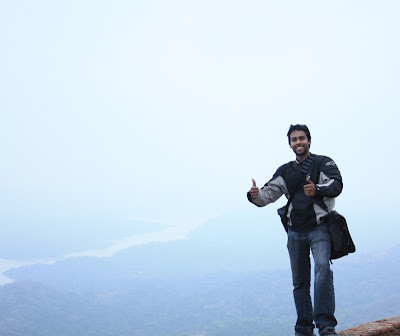 Thumbs up for reaching to the top

After a little while other guys in the team who took the detour also joined us, we relaxed a bit there and started again. 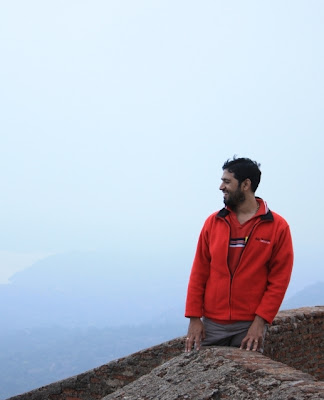 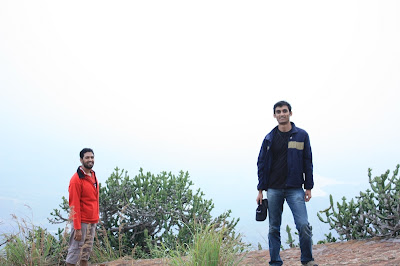 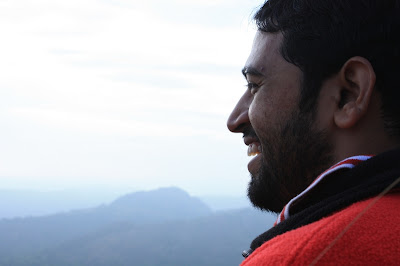 After this point the trek wasn't that tough and it was just a matter of keep walking up the incline. Just then we noticed that three of team mates hadn't joined us and we came to know that they aren't coming till the top as they were finding less grip in their shoes to climb up also they were feeling a bit too tired. Anyways we continued and haulting for some photographs which became more of a photo session than the just clicking scenic views :D
It was fun posing and taking photos turn by turn :) 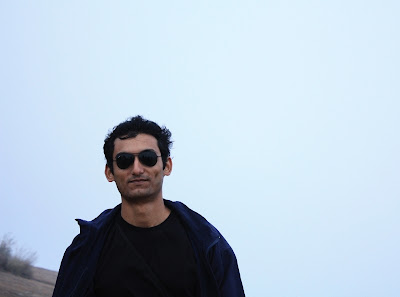 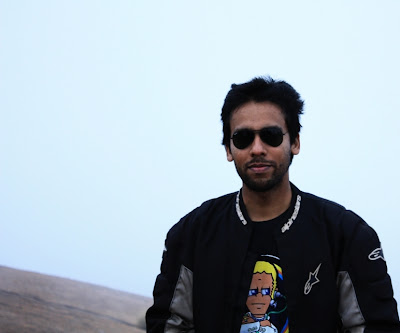 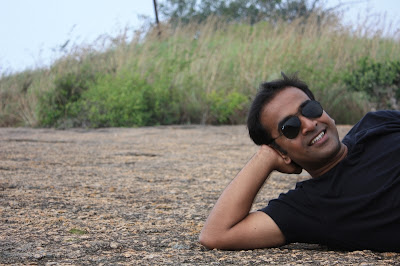 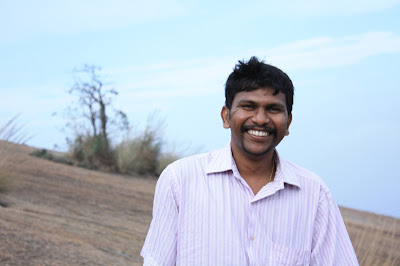 We reached a shady place while trekking and then Girish, my office colleague gave an idea of taking pictures using the lights coming from outside. We experimented and the photo came out very well and yet again it was photo session with everyone demanding the same kind of photograph :D. So be it :) 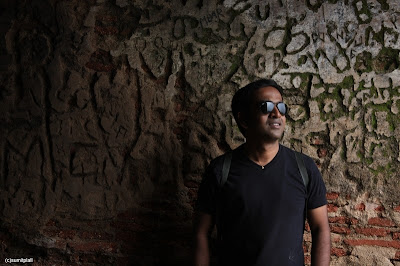 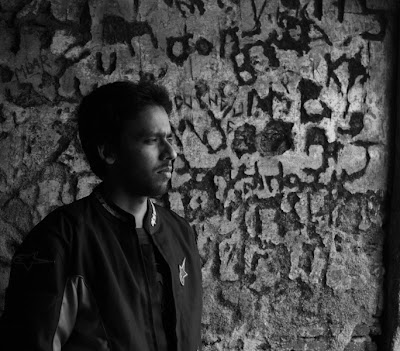 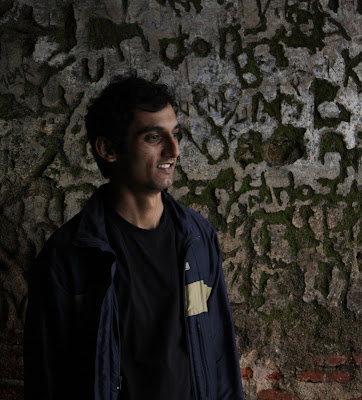 We reached the temple and farthest point on the mountain we could have trekked. Spent some time there, had snacks and then decided to head back. It was already 10 o clock and by the time we reach to the bottom of the mountain it will be lunch time and we decided to have lunch somewhere on the way back.
Trekking back was kind of boring since we had to take the same path as we came up and takes more energy to climb down than to climb up. Climbing up anyways you have the adrenaline pumping and that enthusiasm is there. We took our own sweet time coming down taking breaks. By this time my left knee which already so weak, due to the ligament rupture, started paining in an unusual way and hence I decided to take it slowly rather than doing more damage to the knee.
We came down, washed our faces, had the idli vada that we got packed from office while starting and started back.
While coming back on Magadi road I saw the NICE corridor and was very tempted to take that road as it is super smooth, one can go a bit fast on it, not much of traffic too. Also this roads is very near to my house. Hence decided to skip the lunch with the team mates and take that route. Informed the guys through SMS and took the diversion towards NICE road. Paid the toll tax which was 13/- for Magadi Road to Kanakpura road exit.
Had a nice blast on the road and reached back home at 2 o clock.
It was a nice small ride and trek and perfect way spend half of the weekend :) Other half will anyways be going away recovering from the adventurous trek :D. But surprisingly next day wasn't that painful as I expected it to be, I expecting some major cramps due to the trek. Just some minor pain in the left knee and shoulders. Apart from that everything was alright. This was a surprise to me :D Hmm so my stamina has increased....... :) Thanks to my regular light workout at home.......
Back to Main Page