By sumit November 13, 2008
Day 10 Leh - Khardungla (very short day for us, read on to know why)
10th day and by now we had already lost approximately 3 days of planned trip due to unforeseen events, some due to negligence (bikes not getting delivered on time) and some due nature's strength (inundated streams). By this time we should have visited Hanle, Chumur and come back to leh and visit the Nubra valley, crossing Khardungla on the way. And we had to come back to Leh without covering Hanle and Chumur due to problem in permits (Read this). We all were very disappointed due to this. Anyways We decided next day we would visit Khardung la and continue towards Nubra Valley and make a stay in Diskit and visiting near by places.
We started towards Khardung la/K-top (Alt: 18380ft) which 42 kms from Leh. This was kind of a regulation spot that everybody covers We were pretty eased up as by now we had got acclimatized with the higher altitudes and some of the most treacherous routes. While climbing we stopped for some pictures. 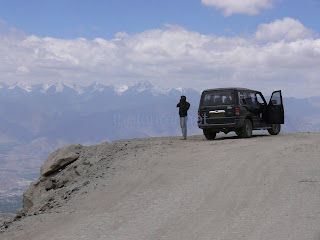 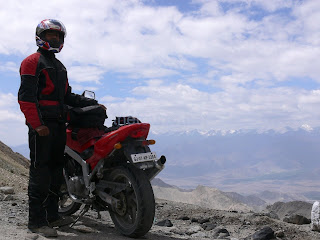 Yours truly. It was pretty cold notice how I have clinched my fist
Photographer: Chetan 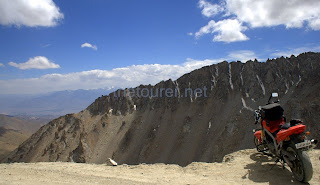 My bike on the edge
Photographer: Sunil 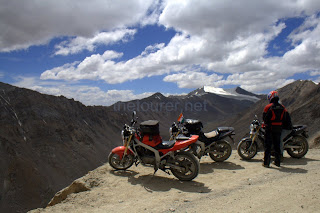 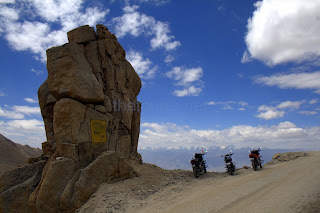 Photographer: Sunil
The road wasn't in the best of the shapes and was crowded as K-top is one of the most visited spots in Leh. A lot of trucks, people on bicycles (yeah you read it right!), jeeps etc. As we climbed up we could see the Kunchenjenga mountain ranges. We reached to the top clicked some snaps again in front of the banner that said "Welcome to the world's highest motorable road" We thought of having tea there but it was too crowded and decided to move on and decent down the other side. This side's roads were much worse than the side facing Leh. We reached to the bottom and it was Lunch time. Since we didn't have to cover much ground we were taking our sweet time for everything. We had lunch there and suddenly something clicked off and all of us decided to go back to Leh and then relax for the rest of the day and start for Hanle and Chumur on the scorpio. We all were too much disappointed that we were missing those places which was the highlight of our trip. Already everyone was bugged up with bad roads and doing off-roading and it was a unanimous decision to skip Nubra Valley (which is mainly a tourist spot) and go for Hanle (which is Changthang valley, one of the most uninhibited place in Ladakh). Also Nubra valley itself deserves a good three days of time for covering the places around and it wasn't worth just going there and coming back due to lack of time. This place we can cover in the future trips too.
Then without wasting time we started climbing K-top again. On the way some of the rare mishap happened with our team.
The vehicles were using the roads and there was construction going simultaneously and as Sunil sir was climbing the top, there was a roadroller which was cleaning up the lose rocks and debris from the roads. He didn't notice that Sunil sir was coming and the driver turned the BIG arm of the roadroller towards Sunil sir. Sunil sir had to brake to avoid the swinging arm. Luckily he was successful in doing so without falling down. Had that arm hit Sunil sir or his bike, he would have thrown off from the cliff which needless to would have been fatal.
Thats not only incident, I and Prabhu were climbing together with Prabhu in front and a truck separating us. The truck in front of me had stopped and I noticed it isn't moving for a little long time than usual. Then only I realized that Prabhu had fallen down. I got down of the bike and went to help him out. The reason why he fell down was because of the lose rock that were falling off from the road up. The lose rocks used to fall down to the lower roads because of heavy vehicle passing through and one of the rocks came in and hit his rear tire which cause him to fall down. Nothing major happened. Bike and the rider was ok and we continued further to Leh.
While coming down towards Leh we met a group of bikers on bullet and we came to know that they were from Delhi and one of them (I forgot his name) owned a Suzuki Hayabusa and he said he is one of the founders of a group called Group Of Delhi SuperBikers (G.O.D.S.).
We told him that we conquered the M-top earlier in our trip and he was very much surprised and congratulated us for this feat. 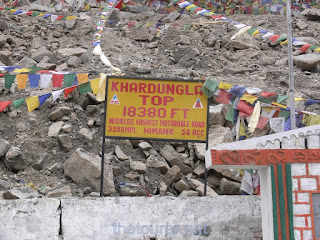 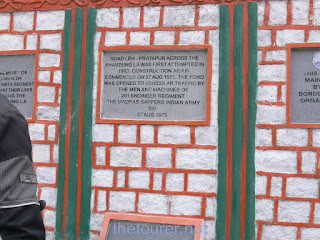 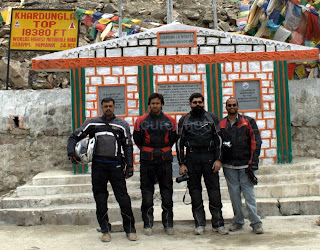 After a short chat we continued towards leh. On the way back I and Prabhu took a detour which was my mistake and ended up some unknown part of Leh. We were asking the way back to our hotel and by mistake and by mistake I banged Prabhu's bike from behind. Nothing happened but just a bit laughter shared between us :) Sorry pal :) never meant to do it purposefully.
We reached back Leh and relaxed for the rest of the day and decided to start off to Hanle Chumur but this time not on bikes but on Scorpio.
I know a lot of bikers would be criticizing our decision saying that we abandoned the bikes but the fact of the matter is that in all these 10 days we all were totally exhausted of tackling the treacherous roads in the process of conquering M-top, K-top, Changla, Tanglang la, etc nonstop and we gave a thought that we are just running around the places just to cover them and marking the places as visited and not enjoying the beauty that we were passing through. So this time we thought of giving some rest our bodies, bikes, minds and let all of us enjoy the beauty of the himalayas traveling on a scorpio. And I and the whole team agree that we took the right decision.
So this is the end of day 10 with the regulatory visit to Khardung la and coming back.
Next day we decided to head towards Hanle, stay at Hanle and then next day move on to Chumur. On the way back from Chumur to Leh we would cover Tso moriri and also the hot water springs of Chumathang.
Interesting fact:
Gravity Hill
Previous Day|Next Day