By sumit September 10, 2008
22 July 2008:
After last days eventful ride I woke up next morning. I felt better but still heaviness was there in my head. Quickly we had breakfast and started preparing for Leh which was 171kms away.
Paid the tent ladies for the night stay, lubricated bike's chains.
We would be crossing the "Moore Plains" and Tanglangla (Alt: 17582 feet) for that day.
We climbed uphill road and there we could see the Moore Plains. Moore plains are the endless plains at the altitude of 15k feet without any trees or shade. One can see the several kms of road ahead just like that and far away the big mountains were visible. Some of the pics: 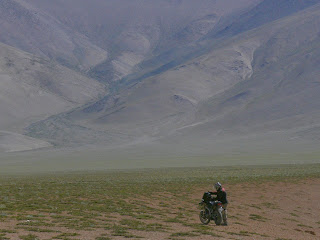 Prabhu taking a break in the plains 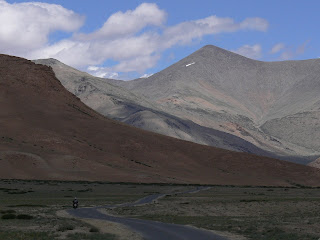 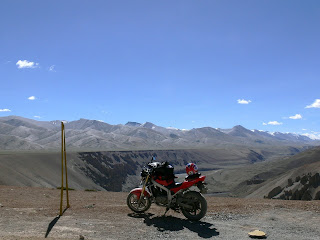 The road was mostly good but there were some patches under construction where we had to take a detour and again join the main road. The detours were horrible, there was dust everywhere that too the piles of dust were very deep. At some places it was of height till our thighs. We had take the path made by trucks otherwise our bikes would have stuck inside the piles of dust. Sunil sir went straight into one of the piles. He was telling at one point it felt as if he is going down with the loose dust, just like in quick sand. Our bikes were full of dust. 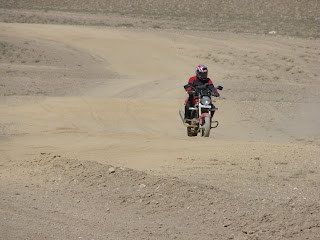 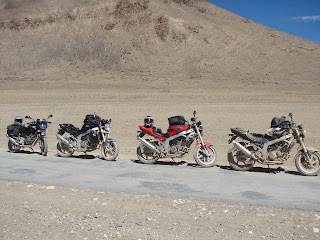 Photographer: Prabhu
Our foreigner friend "Jesse" fell yet again and broke his bike's headlight. He himself said that he was a beginner rider. He went to fast into the dust pile and he fell down.
After some 60kms of straight roads and detours we started climbing the last "pass" of this leg i.e. Tanglangla. The road was good while going up and pathetic on coming down. This was probably the longest pass (not sure I felt so) in terms of Kms traveled on the mountains. On reaching the top again we started feeling a little dizzy, why not we were at an altitude of 17562 feet, so we decided to move on. 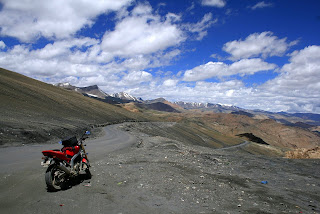 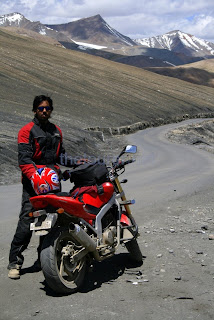 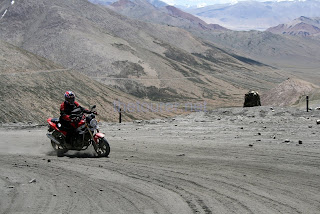 Photographer: Sunil
Coming down we were stopped by a road roller which was clearing off the path and we had to wait for at least 45 minutes. This is where Chetan forgot his Camera and wallet while resting which he couldn't retrieve back, probably some worker working there picked it up. Anyways nothing can be done we moved ahead and reached to the foot hills of Tangalangla. 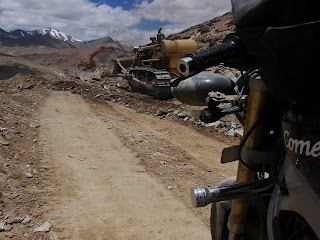 Roadroller blocking our way in Tanglangla
Photographer: Prabhu
We reached Rumtse and immediately we noticed a total change in ambience there, it was no longer a baron land. We could see high trees lots of greenery and all colored mountain, yeah you read it right, the mountains had different colors like violet, brown, some shade of red, etc. It was beautiful.
The road was also very good. Leh was around 80 kms ahead.
We took a lot of photos en route passing several villages like gaya, etc with Indus river flowing along side the road.
We reached Upshi which was around 45kms from Leh. Had a nice lunch in one of the dhaba and continued towards Leh. We saw a board mentioning Hanle 250kms which was there on our plans.
The roads became butter smooth and we didn't break a sweat to cover that 45 kms unlike previous day's experience in which covering even 10kms felt like covering 100kms. On the way we stopped at several places, our mobiles started working and Chetan called up the customer service guys for his lost credit/debit cards. He got them blocked.
We reached Leh at 4 or 5 o clock and started looking for accommodation. Our Leh driver, with whom we were interacting before coming there for the trip and the hotel, was out of Leh and so we had to settle in a cheap hotel for one day. Our day's ride was over and finally I decided to remove the air filter restriction from the bike. The whole trip till now I had been struggling with my bike. It used to overflow the carbs which made the bike to stutter a lot.
In the night Sunil Sir fixed his bike by lowering the needle in the carbs and Prabhu and I removed the restriction. Immediately after removing it I could feel the bike breathing properly and bike was now pulling cleanly (Of course not as smooth as in the plains but surely better than before removal).
Pics Rumtse to Leh: 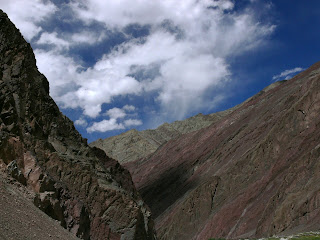 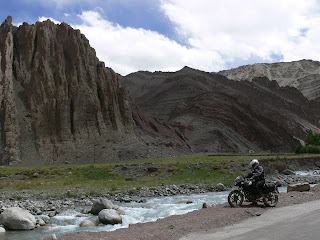 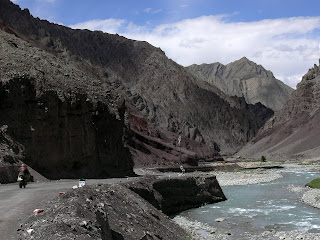 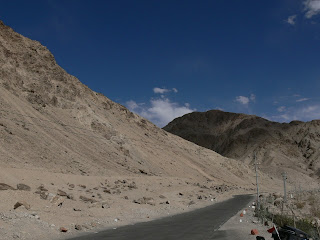 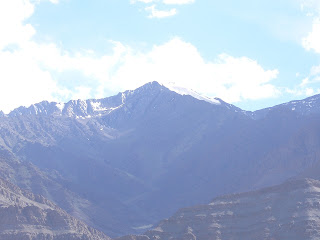