By sumit August 22, 2008
Right from time when started touring on bike I wanted to go for a trip to Himalayas.
Himalayas is considered to be the ultimate frontier for bikers from all over the world.
When the plan was put in front of me by my friends (Prabhu, Sunil, Akhil), I was very reluctant.
Why reluctant when this was my dream trip??
The reason is I thought I am not ready for it for a couple of issues.
First: The financial problem as this trip demanded a considerable amount of money.
Second: I thought I needed to prepare for this trip physically as well as mentally. Yes this trip was demanding in every sense.
Third: Getting leaves from the office for two weeks.

Despite all these issues I decided to go ahead with the trip. I told to myself: heck! this is my only chance it is now or never and I won't get the fantastic company of my friends. I arranged the money, tried to prepare myself physically and mentally by exercising daily, control my breathing etc. I managed to get leaves from my office. Big thanks to my manager for approving my leaves.

The Himalayas where I would be riding through some of the world's most demanding terrains and at the same time world's most beautiful places.
In the coming days I would be putting in my experiences I had in the trip and putting some of the pics took in the trip but before that some stats:
Dates: 18 July - 3 August 2008
Total Kms done: 2346 Kms
Total days: 16 Days
Bike Used: Hyosung Comet GT250
Route:
Chandigarh - Manali - Leh - Pangong Tso - Marsmikla - Spangmik - Chushul - Leh - Khardungla - Hanle - Chumur - Leh - Manali - Chandigarh - Ambala.
Disclaimer: The pics are taken by me unless photographer name mentioned before or after the picture.
I am just penning down my experiences and interesting/non-interesteing things that happened during the trip. The statistics that I'll put might not have pin point accuracy. Readers shouldn't take the same as bottomline and plan a trip based upon it. I'll try putting the relevant links where ever possible which might give you more detailed information.
Preparations for the trip:
First and foremost thing to prepare was my bike because that is the thing which will be taking me to places and I had to make sure that the bike can withstand the unforgiving terrain. So it started with checking the bike thoroughly whether everything is in place or not.
Tyres: One thing I noticed that the bike's tyres are 85% worn out and might not hold good there in himalayas. But I decided not the change the tyres as it takes long time to receive those after ordering online (we don't get spare parts for the Comet in India). There were some other brand's on-off road tyres available but not a direct fit (V-Rubber: 140/80/17). I didn't want to go for that either as I didn't want to go on the trip with alien tyres whose characteristics I didn't know. Prabhu went for it.
Spark Plug: Next thing was to change the spark plug as stock ones might not be effective for the extreme cold weather out there. I got the Iridium spark plugs from Sunil sir and installed it and after that the bike felt so smooth.
The Air filter: Another aftermarket stuff to be installed was the Air filter. Comet's air filter by default is very restricted and to add to that the absence of oxygen at high altitudes in himalayas, it was a recipe of sure shot breakdown of the bike. I went for the free flow exhaust, the K&N filters. The bike didn't accept this up-gradation that smoothly. My mechanic had to do a lot of settings to make the air-fuel ratio right. He did it but I wasn't very happy with the bike's performance. But still we didn't have that much of time left and we had give the bike for packing and shipping to Chandigarh from where our actual journey was about to start.

The Crash Guard: Since we will be going on a highly rough terrains and some places wouldn't be having roads itself, The last thing that I wanted to do on the bike was a decent crash guard, comet doesn't come with crash guard or a proper place to install the crash protectors. I took custom frame sliders from Sunil and installed it on the bike but it wasn't very stable and might have broken/bent easily even on mild fall. Then my mechanic (Irshaad) designed a crash guard and installed it on the bike. The guard was pretty strong and stable and I decided to keep it and go ahead. So this way my bike was prepared for the ride.
Finally Akhil opted out from the trip and Chetan joined in.
We packed our bikes in July first week to be transported to Chandigarh from where our trip was planned to start.
Useful Links:
- Ladakh Travel Guide
- Preparing your bike
- The ultimate guide for Leh 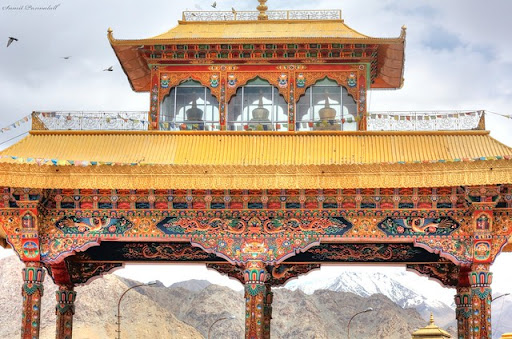 Kargil to Leh (A Different Route)

Important Notice: While on the trip out of goodwill I had shared my pics with some of fellow travelers. It might well be possible that you might see my pictures that are shown here, posted somewhere else on the web too. It was not very wise of me to share my pics without proper attribution (watermarks) done, but i f you do see such pictures please report it to me. Day 6, 9th July: Kargil to Leh (A different route) So a new day a new destination and I am loving it . Got up early packed up things, spoke to the guest house owner so that I can pay him and start my journey. I casually asked him whether the roads till Leh are good or bad. He said there are construction works going on the route before Lamayuru. New road was being laid and they were using explosives to clear out the way which meant if I reach the place at a wrong time I could get stuck for hours there. The guest house owner suggested me to take the route from Batalik. He told the road through that place is really
Read more