So the D-Day had come when we actually start our riding towards the Himalayas. We were so excited. We got up late as we slept very late in the night (around 4 or may be late) at about 9 or 10 o clock. We had heavy breakfast and decided to push off as we had to cover a lot of distance on that day. Actually the distance wasn't too much (115kms) but the terrain was pretty bad.
So we booked a Bolero camper so that our luggage and our friend can come on hat and we'll start with bikes.
We checked out from the hotel and filled petrol in the three cans that we bought enroute to Manali from Chandigarh.
So by 12.30 we were good to go and started our journey. Picture outside the hotel: 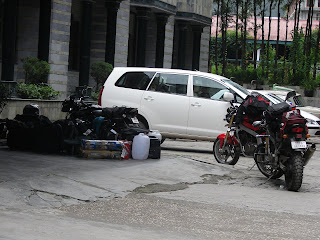 Photographer: Prabhu
We filled 60 liters of petrol for all four bikes. Sunil sir's bike's side stand had broken during transportation and he suggested we go ahead while he will get that fixed and catch up later so I and Prabhu went ahead and caught up with the bolero which started earlier than us as it had to be covered for rain protection. Soon Sunil sir caught up, we stopped a lot of times for taking photos and every now and then we'll stop for photos which ate a lot of time. Obviously we were at this kind of place for the first time in our lives. Being awestruck by the views of the mountains do deserve a lot of snaps ;)
Some pics: 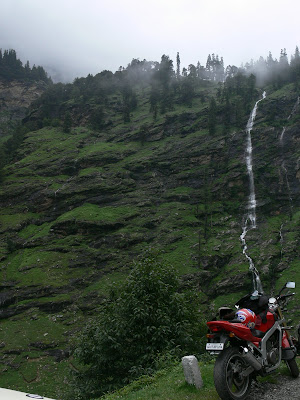 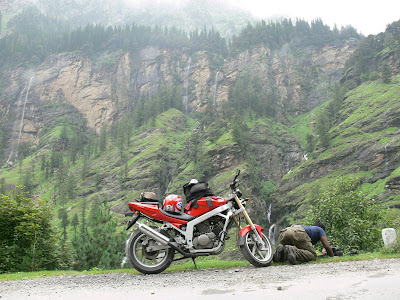 So we finally reached the foot of Rohtang pass (Alt:13051 feet/3979 m) and started climbing. The lack of air and the restriction in my bike's air filter had started to play an important role to the performance of the bike. The bike was getting rich in fuel as not much of air was going in. I could feel the bike isn't pulling properly. I discussed it with Sunil sir and he suggested that I should remove the air filter restriction which will make the bike breathe easier. But I was very hesitant to do that as I feared if something else goes wrong doing this we'll lose time which we couldn't afford. Hence decided to manage with it and go ahead. I though I could have a look at it somewhere in the middle or probably in Leh.
While on the way to Rohtang we passed a glacier, it was frozen very close to the roads and we could go and touch the snow. We took some snaps there also and started towards the top. We reached rohtang top and it was fully cloudy making it almost zero visibility. We had lunch there at 3 or may be 4 (Yeah we did take a long time to reach there from Manali, reason?? Obviously photos :D). 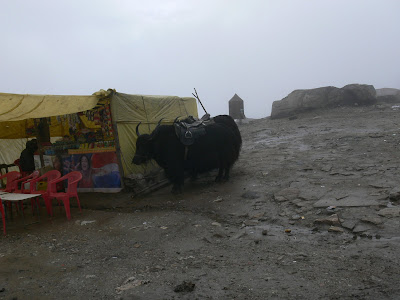 The roads were pathetic with all the slush and mud due to rains While going down to the other side I had to cross a big ditch with full of slush. Front tire went inside and the moment the rear tire entered the ditch, some lose stones rolled and suddenly I went into a deep portion of the ditch, I had to put my leg down to balance. I didn't fall down but yeah the leg was full muddy. Anyways I came out of the ditch and took a left curve very slowly. And suddenly the most beautiful thing happened in my life. Suddenly all of the clouds cleared and sun rays just lit up the whole environment and thats when the first sight of snow covered of mountains!!!! Man it was amazing, cannot express in words how I felt. Thats when I said to myself "So finally I've reached here, The Himalayas" 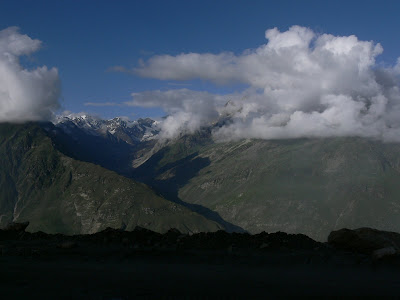 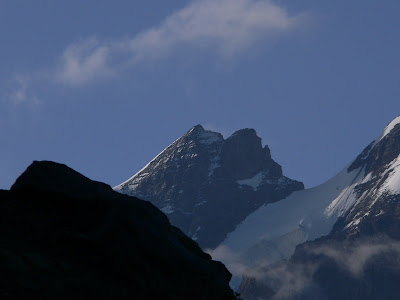 We stopped again several times for photos as if we were trying to capture the whole himalayas into our cameras.
So at the bottom of Rohtang, at Koksar we had some tea, snacks and decided to push off fast as we were still far away from reaching that day's destination i.e. Keylong. 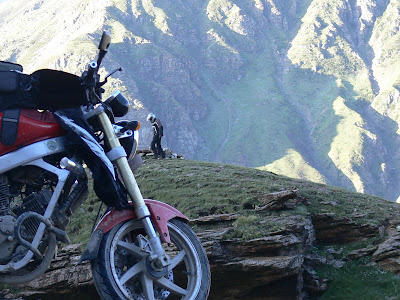 By this time we didn't feel anything regarding the AMS (Acute Mountain Sickness), we hadn't reached at that altitude yet.
It was getting dark and roads were getting badder mile by mile, the reason being it was being laid afresh and they had dig it out and absolutely no tar was there and only gravel. We had ride around 60 kms in the night that on non-existent roads but still we had to do it. Finally we reached Keylong at 10 o clock and booked a decent hotel. We spotted moon rise and again we started clicking photos, Oh no not again, but that was fun after all I am a newbie and can't miss a chance of learning and practicing at such a location and timing ;) 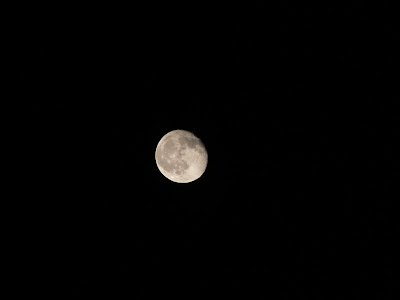 See I am learning to take good photos :)
So this is how our day 3 ended. We reached where we had planned for but one thing for sure we decided is that we won't be doing night rides anymore in the trip. It was dangerous ask but since we were running short of time we had to do it but not anymore. Deciding this we rested and slept and planned for getting up by 6 and starting off for Sarchu or Pang.
Statistics:
Distance Covered: 120Kms
Time taken: 7 hours (courtesy extremly bad roads and lots of stops for photography)
Useful Links:
- Manali – Leh Travel Guide
Previous Day | Next Day