We woke up and started calling again and asking for the bikes. The Aakash guy (forgot his name) told that the bikes are in the Chandigarh somewhere and he gave the address. We hired a taxi and went to the place for collecting the bikes. The reached the place and saw the bikes were in a small truck whose number didn't match with the one given to us earlier.
We unloaded the bikes from the truck using a ramp which we all forced them to use otherwise they would have unloaded the truck in their usual way (brute force method: throwing things out of the truck just like that) :(
We found there were damages in almost all of the bikes. But nothing major that would hinder our trip. We blasted the transport guy, called up his boss and told him the scenario. The boss asked us to note down the damages and hand it over to the local guy and assured us that the company will pay up for the damages.
We unpacked our bikes and trying starting it and thankfully every bike was up and running :). After that we all came back to the hotel hired a taxi, an Indica, which will take us to Manali.
So at 3 PM we started our journey towards Manali.

The temperature was sky high and we being in Bangalore are used to of the moderate climate, felt more heat. We got stuck in a railway crossing where a good train was crossing at snail's pace. We had to wait for half an hour for it clear up, in the meantime we gulped several glasses of lemon soda.
We were greeted with nice twisties and roads were a mixed bag consisting good stretches plus the bad ones too.
It was getting dark and still we were far away from Manali. We purchased some container for storing the petrol which we'll require while riding in Leh and places.
Sunset Pic: 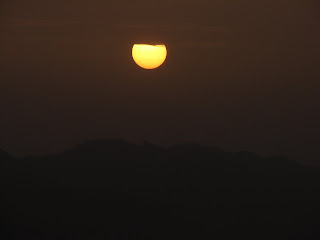 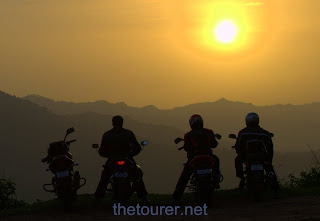 Photographer: Prabhu (Sunil Sir's Cam)
L-R: Prabhu's Bike, Sunil Sir, Yours truly and Chetan
We reached Bilaspur, had dinner and continued towards Manali. Since it was getting late we were in two minds whether to stay in Kulu itself or move forward to Manali. Staying at Kulu would have meant that we'll lose some more time the next time which we couldn't afford to do as we had already lost a day and a half because of the bike transportation. So we decided to reach Manali. On the way we were stopped by Police check posts asking for our credentials. Whenever we stopped for a butt break we could hear the sweet sounds of waterfall beside the road which we couldn't see due to dark. We passed through a dam "Pandoh Dam" which was looking beautiful in the night time with all those lights and the reflections in the water.
Clicked some pictures and finally late night we reached Manali. Searched for a decent hotel and checked in hotel "Piccadily"
Some pictures of Pandoh Dam: 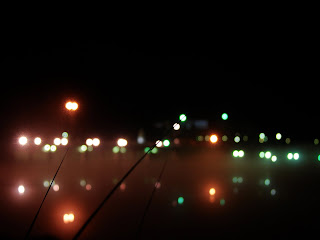 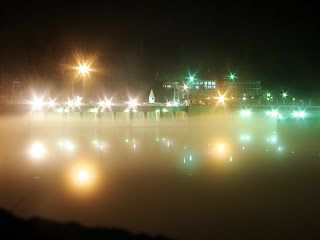