Bangalore to Bangalore Airport and to Delhi.

By sumit August 22, 2008
Bangalore to Bangalore Airport and then to Delhi.

It was Thursday evening and finally the day was there when my dream trip was about to start :). I was pretty excited about it and called up Prabhu, Sunil sir and Chetan if anything extra we needed to carry apart from whatever planned. I had loads of work in the office as I had to complete everything from my side before going for the long vacation. I worked till 8.45PM finished off everything handed over the work to my manager, took the printouts of maps and plan that Sunil sir had put on this thread and started for home.
Chetan had already spoken to a person for the taxi to the airport which will pick us all up and go to airport. He told that he has got the full Tempo Traveler for us for some 1000 bucks:eek:.
I and Chetan decided that Chetan will come to my house with his luggage and at my house only the Taxi will come and then we'll pick up Prabhu, Mohan finally to Sunil sir's house from there to airport.

Chetan told that John and other guys wanted to meet us before we leave for Delhi.
At 11.45 Chetan came to my house and we met John and one more person. We had small chit chat and then started for Prabhu's house. When we reached his house at 12.30 AM we were shocked to see nothing was packed and Prabhu was sitting in the middle of all open bags :D. At first sight I thought has Prabhu has cancelled his trip on the last moment? :D
But then in 45 minutes Prabhu packed up everything was good to go, on the way picked up Mohan and headed towards Sunil sirs house, the time was 1.45 AM
We reached Sunil sir's house, he was all ready to go with the most amount of luggage. As promised by him, Sunil sir handed me his old camera so that I could also take pictures in the trip. Then placed all the luggage on to the taxi and headed towards the airport. On the way I messaged Akhil asking him when is he coming to the airport, for which he replied that he will be coming by 4.30 something.
We reached airport, put our luggage on the trollies and headed towards the Cafe Coffee day to have something.
Some already existing pics on this thread. Only logs are boring right?

We spotted the full moon and all of us started to click the moon pictures. 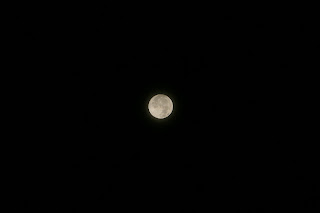 We had a nice little chit chat with the BIAL guys pestering us to move the R1 from that place as the place was reserved for those Meru taxis and park it in the parking area which was 1 KM away.
Because of that Akhil decided to push off early from the airport. After Akhil left we went for the checkin, we were really concerned regarding the luggage whether it will be more than the stipulated weight or less. Luckily it came upto some 100 Kgs for which the airline guys didn't crib. So everything checked in and we started for boarding the plane. Sunil sir posted the above photos through his iPhone using the WiFi connection in the Airport and our Mohan was busy in his photography :).
At 6.00 something we boarded the plane and there started our journey and ended our day zero.